Our language course follows the curriculum of the Goethe institution and has an international recognized standard. To fulfill and maintain this standard, every language course participant has the obligation to understand and follow the rules and regulations released by ERG and abide by them. 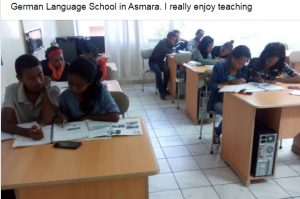 The language you are about to learn is spoken as a first language by over 110 million people of whom 82 million live in the Federal Republic of Germany,
7 million in Austria, and  4 million in Switzerland.

If you include all the other regions of the world where German is understood or is in regular use a lingua franca then you can estimate that over 100 million people speak German.  German belongs to the Germanic branch of the, Indo-European “family of languages”, like English, German has a great deal of words derived from Latin, and they are instantly recognizable. Like English, German also has many dialects and regional variations, but the version you are about to learn is universally accepted.

What can you expect from learning German in our organization?
You will know enough German to be able to hold up your end of a conversation with out having to call for an interpreter, but also enough to enable you at a later stage to read text in German.